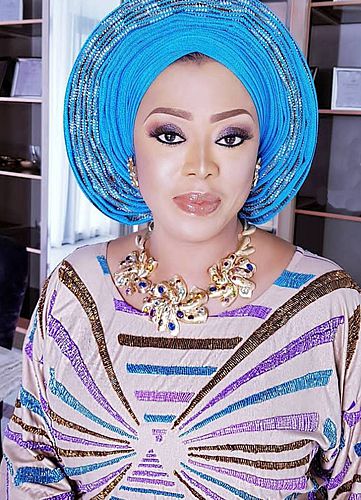 Bom in l977 to the Olusanya family of Ago-Iwoye, Temitope had her Elementary education at Command Children School, Maryland Ikeja, Lagos. She attended Remo Secondary School, Shagamu, Ogun State and then the Ogun State Polythenic, now Moshood Abiola Polytechnic Abeokuta for her OND. She finally enrolled at the Olabisi Onabanjo University for a Bachelor's degree in Accountancy which she concluded successfully in 2001.

She had her NYSC'with the Central Bank of Nigeria, (CBN), Benin City and worked briefy after her seryice with Homeland America International Union, the facilitator of Western Union Funds transfer in Nigeria, as an Accountant.

Temitope met Chief Adebutu at a Church Service at Tafawa Balewa Square in 2004 "Both of us came as Guests," she recounted. "It was a brief meeting: she continued. "We met again at Eko le Meridian Hotel where we spoke extensively for the first time. Thereafter, a warm relationship began and presently, we are both married. I am grateful to God for meeting Chief Adebutu. man, a great teacher and a wonderful husband.

As a Christian, he is very close to God. He loves attending church events and willing to give for Gods work. He is involved in so many church activities and projects beyond his own immediate church. And because of this cross-functional commitment, he was recently made the President of Iperu Pilgrims Association, an appointment that challenges his will to do more for God and His people.

"He is a philanthropist of note. He loves to help people. He is a frank man, always saying his mind the way he feels, whenever the truth must be said. He respects people and he is a very humble man who is ready to please others rather than impose his own wish on them. He is eager to help people out of their problems but does not like to be cheated. He is a strong-willed man for whom I have a lot of respect.

"I see Chief Kesington Adebutu as a good husband and a caring father. Indeed, our relationship is that of father and daughter: warm, affectionate and emotionally strong. He is my greatest confidant, mentor and inspirer. You cannot listen to him without being inspired. I trust his guidance and counselling absolutely. Watching him work with his children intimately gives the impression of a man who has seen the future; a man who is goal-focused and a man who wants the best for society. "Kesington is an honest Nigerian who believes in the innate ability of every human being to excel and has been involved for well over 40 years in providing employment for thousands of people who are able to maintain their family because they work with him. He is a man who is not only joyous